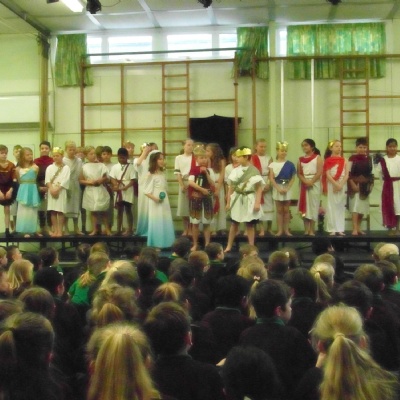 Last Thursday, 15th March, was Greek Day in Year 4 and all the children arrived at school eagerly anticipating a fun day of activities.

There was great excitement first thing in Maple and Chestnut classrooms as the children dressed in their wonderful greek costumes ready to perform "Theseus and the Minotaur" to the whole school.

Later that morning, the children also proudly performed their plays to their parents. The two versions of the play were very different as they were written by the children themselves, but all the children spoke and acted confidently with expert musical accompaniment.

On display were also the plaster masks that the children had made and painted, which depicted some of the main characters including Prince Theseus, King Minos and Princess Ariadne.

During the remainder of the day, the children tried Greek writing and Greek maths, made clay pots and even tasted and evaluated typical Greek food including pitta, humous, olives and grapes.

The day was a great success and thoroughly enjoyed by staff and children alike.