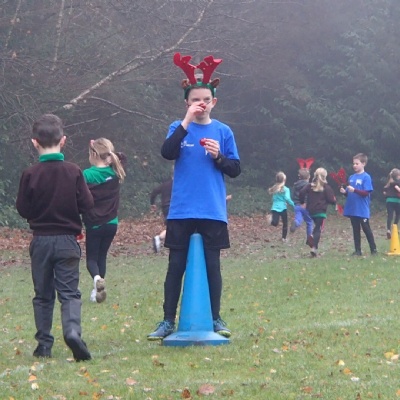 Every pupil was given a set of reindeer antlers and a flashing nose to wear during the run, which proved really useful because the weather was so misty and murky. It was a pleasure to watch the children who took part as they all ran with smiles on their faces. Representatives from the charity joined us to cheer on the children and they were most impressed with their enthusiasm and fitness.

We still do not have final confirmation of the amount of money raised, but the total so far exceeds £3,700, which is incredible. Thank you to everyone who kindly sponsored the children and to the children themselves for taking part. Thank you also to Mrs Taylor for organising the event and to those parents who helped as marshalls on the day and ensured that laps were accurately recorded.

The Phyllis Tuckwell Hospice charity provides invaluable support to people during very difficult times, but they need £20,000 a day to keep running. The school has raised funds for the hospice before as a thank you for the support they have given to families of Crawley Ridge. They have asked us to pass on their gratitude for all your donations.